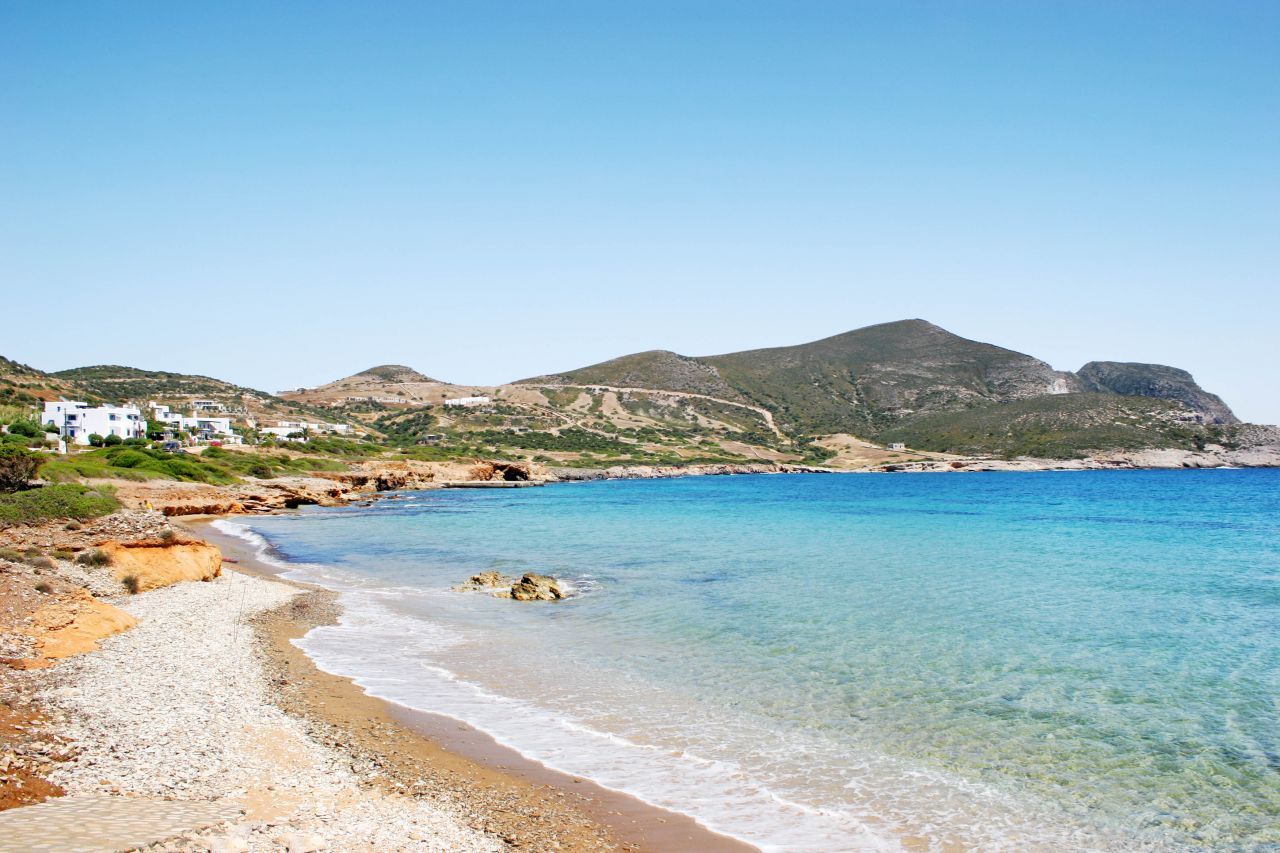 Agios Georgios Beach (or also known as Saint Georgio Beach) south-west of Antiparos village, is one of the most picturesque corners of Antiparos. It is considered to be the most beautiful place on the island.
Agios Georgios is 11 km from the town of Antiparos, at the end of the only road that runs along the coast. It is a beach community with many summer houses, apartments to let, 3 restaurants, a couple of cafés, and two sandy beaches: Kako Rema and Vathys Volos, both excellent for children.

One of the least known and most quiet beaches of Antiparos, Kako Rema is a small captivating sandy beach in the southern part of St. Georgio. Not known by many, it offers privacy and tranquility. Although small in size, it is a beautiful beach with crystalline waters. It is an ideal beach for swimming and snorkeling adventures. Kako Rema is a nice alternative to relax in relative privacy and it is fully protected from the winds. Crystalline emerald waters, golden sandy beach, and nearby tavernas consist of the scenery. This is not an organized beach so make you bring some water and a parasol!
For those of you looking for total privacy, go after one of the isolated coves at the east of the beach, towards the rocky tip of Antiparos.

Vathys Volos is a lovely sandy beach peninsula, located just after the tavernas in St. Georgio. This beach concentrates many people during the summer months due to the clean waters and the total protection from the north winds that often blow on the island during the summer months. You can rent a chaise-longue or parasol and even order coffee or snacks from the local café: their waiters take orders and serve right on the beach!
Nuzzled in a sheltered bay with a clear view to the islet of Despotiko, the beach is ideal for practicing watersports, while at the same time offers a safe harbor for small boats to anchor.
There are three restaurants and a couple of cafés at Saint Georgio. Captain Pipinos and Despotiko tavernas are situated at the harbor of Agios Georgios, one next to the other, and are both popular with the locals. Main dishes are fresh fish and wine, however, one could find also chicken and grilled meat, salads, and all sorts of appetizers. Zombos Taverna is a bit behind the other tavernas that are in the harbor front. This excellent taverna is famous for the quality meat it serves, which is local produce, from the owner’s animals.
From the small pier by the restaurants, you can embark on several boat trips to the islet of Despotiko to visit its beautiful desert beach just opposite St. Georgio or the archaeological site there.

Despotiko is situated almost exactly in the center of the Cyclades and offers beautiful sandy beaches.
Excavations in the wider region have shown that Despotiko was a cult center from the 7th century B.C. until the Roman Times. In the year 2000, archaeologists discovered the remains of a 2,500-year-old Apollo temple, ancient cemeteries, swords, golden jewelry, small statues, and pieces of ceramics, proving that Despotiko was inhabited and developed in ancient times.
In the 17th century, the inhabitants were killed by pirates who wanted to use this tiny island as a shelter in the Aegean Sea. Since then, Despotiko remains uninhabited.