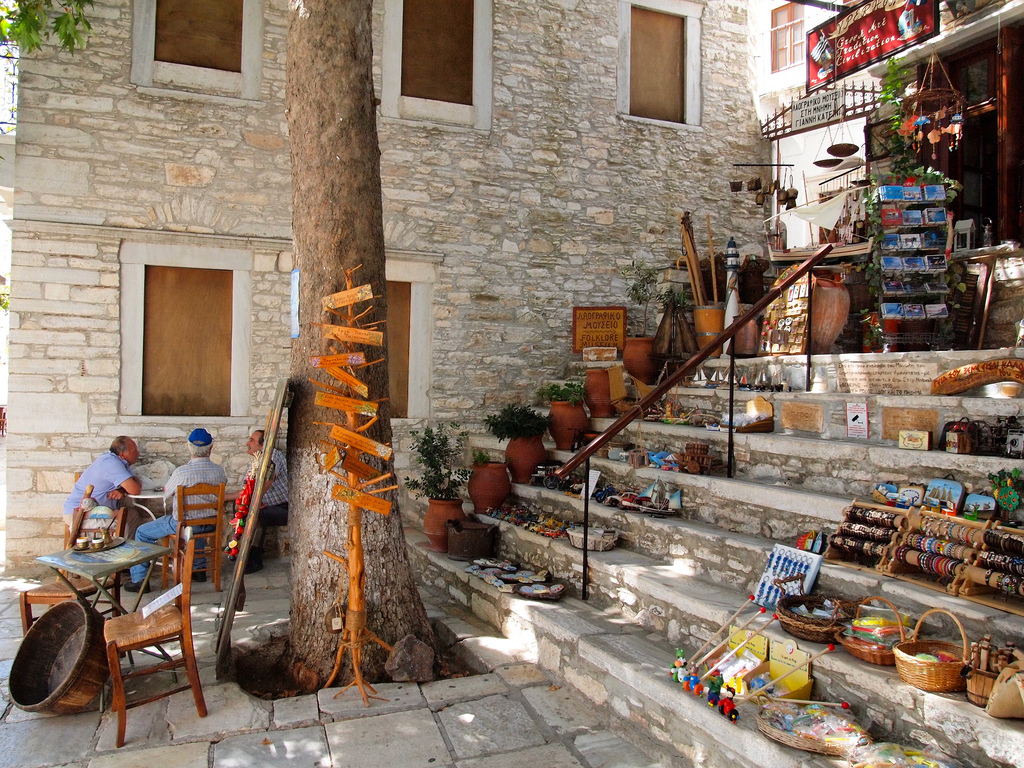 Apeiranthos Naxos Village is a beautiful village in the mountains that is located on Naxos Island. Historically, it has been said that Apeiranthos Naxos village was built by the Cretans sometime in the 10th century. Furthermore, in 1413, a traveler named Cristoforo Buondelmont came upon Aperianthos Naxos Village and confirmed that it existed. The local dialect and many of the traditions in Aperianthos Village resemble that of Crete villages located in the mountains.

There are several interesting attractions in Aperianthos village including three different museums. The three museums include the Archaeological Museum of Apiranthos, a Museum of Folk Art and an interesting Geological Museum. Along with these beautiful and historic museums, Aperiranthos Naxos Village offers views of beautiful churches and other historic buildings. More specifically, tourists should be sure to visit Krispi and Sfortsa, the church of Agia Kyriaki, and the Venetian castles of Somaripa.

Overall, Apeiranthos Naxos Village is a beautiful mountain village that is a must see for anyone traveling through Greece.

Filoti is the largest village located on the Island of Naxos. It sits on the mountainside of Mt. Zas and is practically in the middle of the island. It is rich with local traditions and scenic mountain views.

History is abundant in the village of Filoti. It has many churches and monuments. In the middle of town stands Barotsis Tower which was built in the 17th century. Filoti also has a grand marble fountain that was constructed in 1841. Civilization dates back 5000 years. Over the centuries it has been occupied by numerous cultures. The Crete, Persians, Russians, Turks, and Russians have been known to inhabit the island. It is now part of Greece. Marble was traded by sea as early as 700 B.C. It is known for producing olives and raising cattle.

There is a lot to do in the village of Filoti. There is a variety of restaurants, bars, and music clubs that offer local favorites and a vibrant nightlife. Considering the location of the village sightseeing is also an event in Filoti. Visitors can climb to the top of Mt. Zas to experience and exquisite view of the island of Naxos, the sea around it, and other islands located within close proximity. The event that Filoti is most famous for happens on the 15th of August. It is a religious feast centered on the Assumption of the Virgin Mary. It is three full days of local music, dance, and food. People from around the world travel to the village of Filoti, on the island of Naxos, to take part in this festival.

In the center of the Tragea region of Greece, lies the largest village known to locals as Chalkio, Chalki Naxos Island. This is an ancient region with not to be missed volumes of history . Here on Chalki Naxos Island, there is time to make history books come alive. With extensive sandy beaches and blue jewel of the Mediterranean Sea so near, Chalki Naxos Island offers a view of pristine Greek lifestyle. St. Georges beach is the most famous on this sparkling island. Naturally, the appeal of the sea, sand and surf is one of the main attractions of Chalki Naxos. But, not the only one.

The loveliness of Chalki Naxos lies in village shops, olive groves, ancient ruins and amazing scenery. The ruins of Apollo’s temple built in the 6th century BC known as Portara are most impressive. Chalki Naxos possesses one of the most extensive historical museums with archeological artifacts that date back to the Neolithic Age.

The people of Chalki Naxos welcome visitors and guests with the same hospitality they offer friends and family. In Chalki Naxos, with numerous hotels and restaurants, taking time to savor the wonderful cuisine is an unforgettable experience.

Kinidaros is a beautifully scenic rocky mountain village of the municipality of Naxos. The old world charm mixed with the local fare and delightful residents will welcome you back every time.

Although the town is quite small in population, the residents and business owners in the village still offer unsurpassed service and excellence to visitors passing by.

If you’re looking for a private getaway or family vacation, Kinidaros Village is a wonderful option, offering a nearby Venetian Castle and great shopping.

It is said that the descendants of Kinidaros Village are from an ancient group of musicians and dancers, and so it’s of no surprise that in the summertime evening festivals are often held in the village taverns featuring live music.

If you have the chance, and your near the village of Kinidaros, stop in and say hello, the residents would love to have you as there guest.