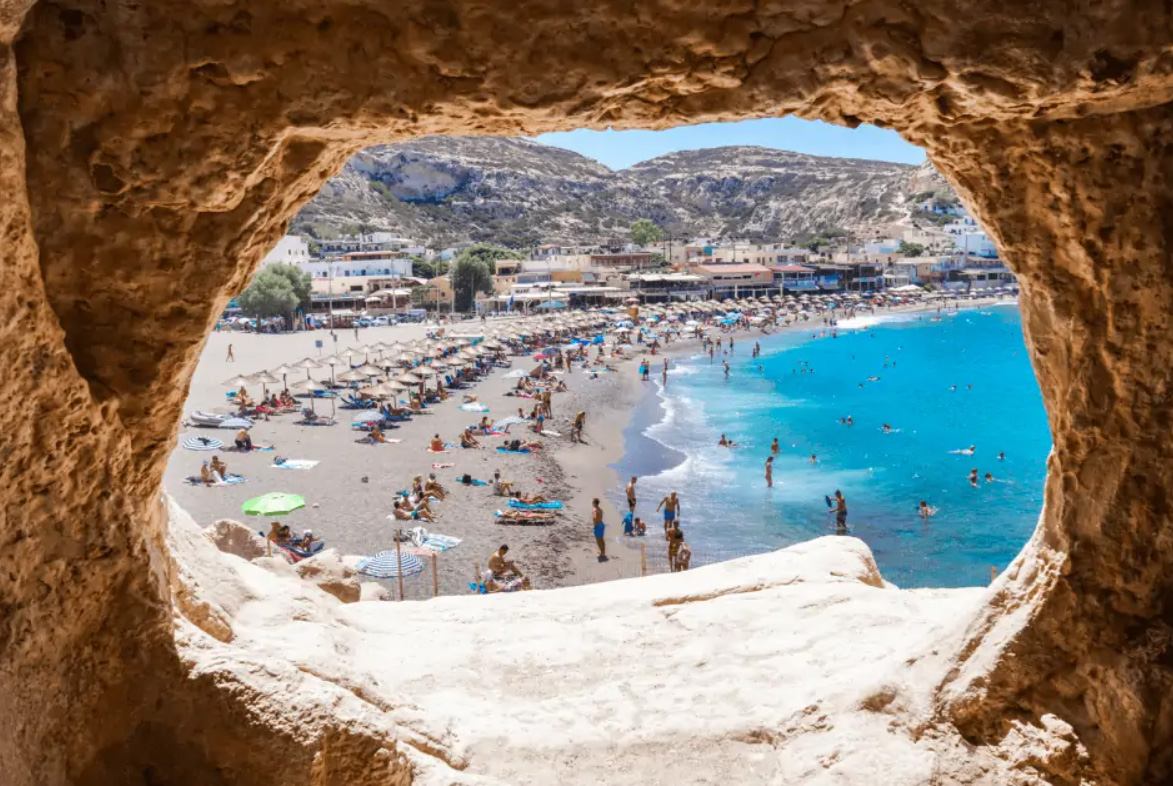 Matala is a picturesque resort town in the centre-south of Crete. It is a distance of about 70km from Heraklion. Matala sits to the south west of the Messara plain. The road over the mountains has been vastly improved making it far easier to reach than just a couple of years ago. Matala beach is situated in a large cove surrounded by sandstone cliffs.

It was once regarded as the best beach in Crete and is famous for its caves that are cut into the cliffs. The beach shelves gently at first and then relatively quickly making it suitable for children to play and for swimming. It is safe and clean and attracts day-trippers from all over Crete. In the centre of the bay there is a submerged flat rock just 0.75m below the surface making it very interesting snorkelling among the many fish that congregate there.

In the summer months, beach beds and umbrellas are available to rent for the day and beachfront bars and tavernas offer a wide variety of drinks, snacks and exceptional traditional Cretan dishes. Just behind the beach there is a campsite with modern facilities and the myriad caves can be explored after your swim and sunbath.
The ‘Dolphin Bar’ sits right behind the beach and has live music throughout the summer months in the afternoon. The duo - "The Acrobates" are really very good and play both Greek and English popular songs from their reportoire. It is a great place to sit and listen to the music, take a refreshment and watch the sun slowly sink into the west.

Sunsets from the beach can be stunning. On the horizon are two islands – the Paximadia, which has a dramatic effect on the skyline at sunset.
There is a lifeguard who is also a masseuse. He offers an excellent massage, in the open on the beach by his watchtower. (If he gets called away to save a life, you just relax and wait his return!)

Behind the beachfront there is a quaint covered market selling an array of goods – Jewellery, Greek and olive wood trinkets, pottery, beach toys, textiles, ice cream and food. The town has a square with a fountain surrounded by more tavernas and shops and an excellent bakery that will make sandwiches and rolls to compliment their spinach and cheese pies and an inexhaustible display of cakes and pastries. A small supermarket is situated further back in the town and a superb bookshop worth mentioning because of its wide selection of books, postcards, etc. in a surprising number of languages.

There are two hotels in the town (not far from the beach) with swimming pools, and they will allow visitors to use the pools if you also patronise their bar and/or restaurants.

The town boasts two small churches, the main church being on the central road opposite the Kafeneion. The second church, well worth a visit, is set into the rocks at the south end of the town dedicated to the Annunciation of the Virgin Mary. Purportedly, it was kept secret during the Ottoman occupation and has (now abandoned) steps from above that were hidden by a dwelling. It has survived, mostly intact, like many other secret churches throughout Crete hidden in the natural terrain. During the busy summer months you can escape the visiting day-trippers and take a walk over the hill to Red Beach. There are two main routes – one being the signposted route up the street from the Hotel Zafiria, which takes you past the grid patterned excavation site. There is then a small ‘climb’ to get up the hillside and over the ridge. The second route is a little easier and more interesting. Take the street from the square that heads down to the quay. Opposite Taverna Giannis is a sharp turn left up a steep street which takes you quickly above the town rooftops. Here you can see the steps down to the secret church among other archaeological excavations. The path is easy to follow and passes the remains of other structures and an ancient beach on the top of the hill, with fossil shells easily visible.
Red Beach is so called because of the colour of the sand. It has no concession for food or drink, so it is advisable to take at least some water. In the summer season the community provides the opportunity to rent umbrellas and beds on the beach. Visitors also take advantage of the absence of a church to bathe ‘au naturalle’, so don’t venture there if you are averse to this practice!

Mediterranean seals use the beaches for sun-bathing and sea turtles for nesting, so keep a look-out for these wonderful happenings. The Libyan Sea is also host to many species of dolphins and whales.