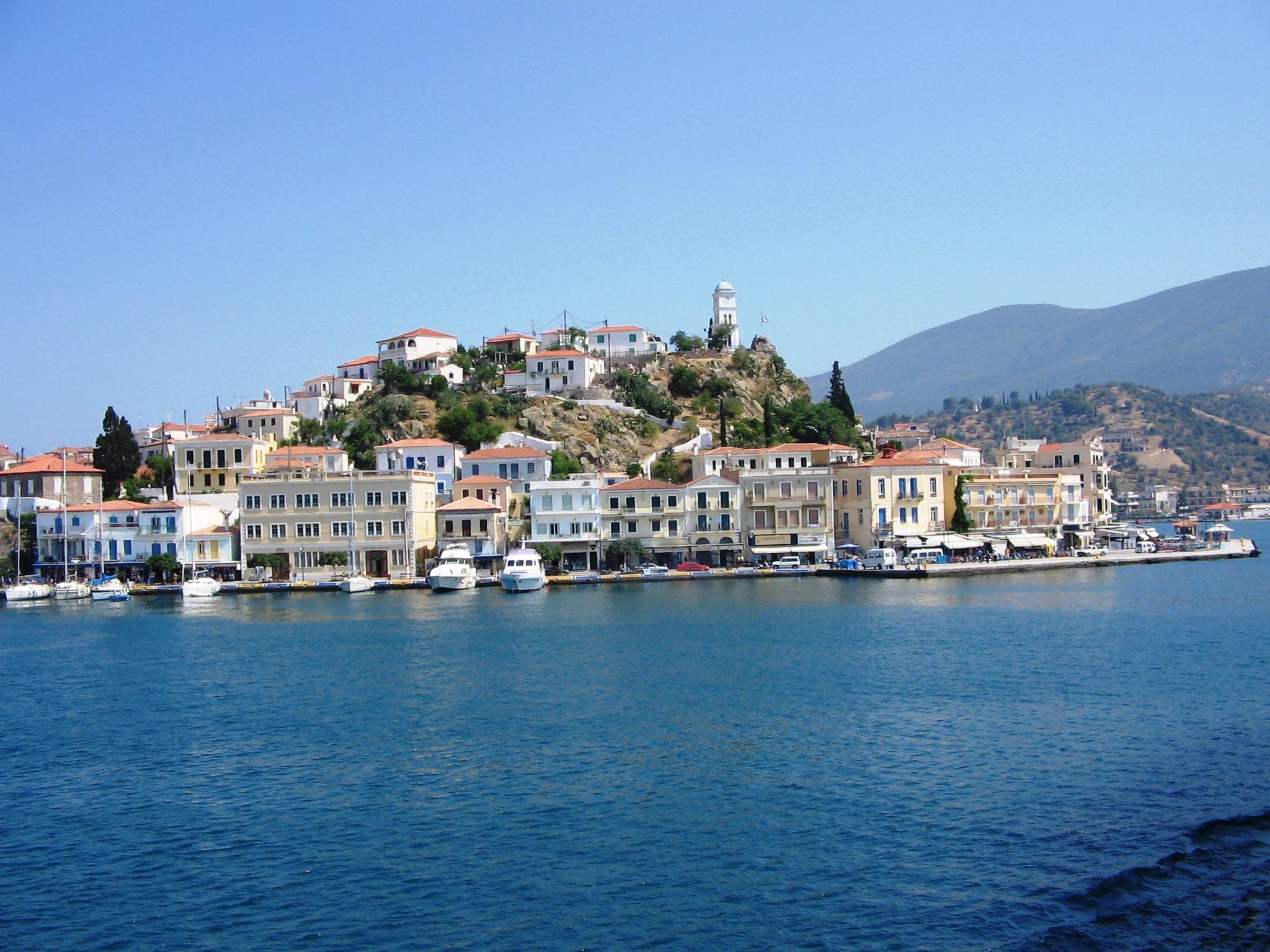 Aegina has a population of 11,270 and is 17 nautical miles from Piraeus. The present-day harbor is the ancient city's commercial harbor. Today it is a busy, noisy meeting place of picturesque fishermen selling the day's catch and grocers, from whom you can buy fresh fruit and vegetables. Next to the harbor is the ancient town's military harbor, which some people have identified with the naval port.

The main road by the seaside is off-limits to vehicles on summer nights. The souvenir shops are busy at all hours of the day. Outstanding, among the island's original gift items, are the traditional water - jugs, which are used to carry and keep water cool.

Worth visiting, in the area of the port, is the chapel of Agios Nikolaos Thalassinos. Towards the inner land, there lies a town with some old neo-classical mansions, which have been restored and are now rented to visitors.

In Sp. Rodi Street stands the island's Museum of History and Folklore, which holds interesting exhibitions on the island's traditional life, as well as art exhibitions, lectures, and seminars.

Close by the church of Agios Nikolaos stands one of the island's oldest medieval buildings, the Tower of Marcellus. Nowadays it is used as an exhibition hall. Behind the tower is the old Liberopoulos home. When Aegina became the first capital of modern Greece it has also become the social center of the era. When Palea Hora was destroyed and the capital was moved back to the harbor town, one of the island's loveliest churches was erected, the Metropolis, which was built in 1806. Another building dating from Kapodistrias' era is the rectangular building of the Orphanage, behind the Saronikos playing - field, a huge edifice for its time.

The road leading towards Agios Nektarios passes from the rather unconventional Church of Faneromeni. On the other side of town, on Kolona hill, stands Aegina's prehistoric town. The first inhabitants of the area settled there around 3000 BC and the site was not abandoned for 2000 years, despite the numerous attacks the inhabitants had to face. The last town was built on the borders of the island's present-day capital and was fortified with walls.

During the 4th century AD, all of the temples, and Apollo's temple as well, were pulled down as symbols of idolatry. In its place, a large building with a water tank was built.

Unfortunately, Kolona's Archaeological Museum has been closed for some time for repairs. Many graves, most of them hewed out of rocks have been found in the area around the town. Kolona's beach is a wonderful place to swim, as well as the small sandy bays, which are formed along the seaside road. The seaside road that leads to Plakakia passes in front of the Wild Animal Treatment Center, which cares for animals and birds.

Worth visiting is the chapel of Agii Theodori, also known as Omorfi Eklissia, on the outskirts of town. A short distance to the south, in the Asomati area, stands the "Red Castle" known as the home of the English Historian G. Finley.

Nightlife in Aegina gets particularly lively during weekends when the Athenians travel to the island and in summer there are Atmospheric bars, places proposing live Greek music, pubs, and clubs that can be found in the capital or in the touristy and busy coastal resorts where the hotels are also located.