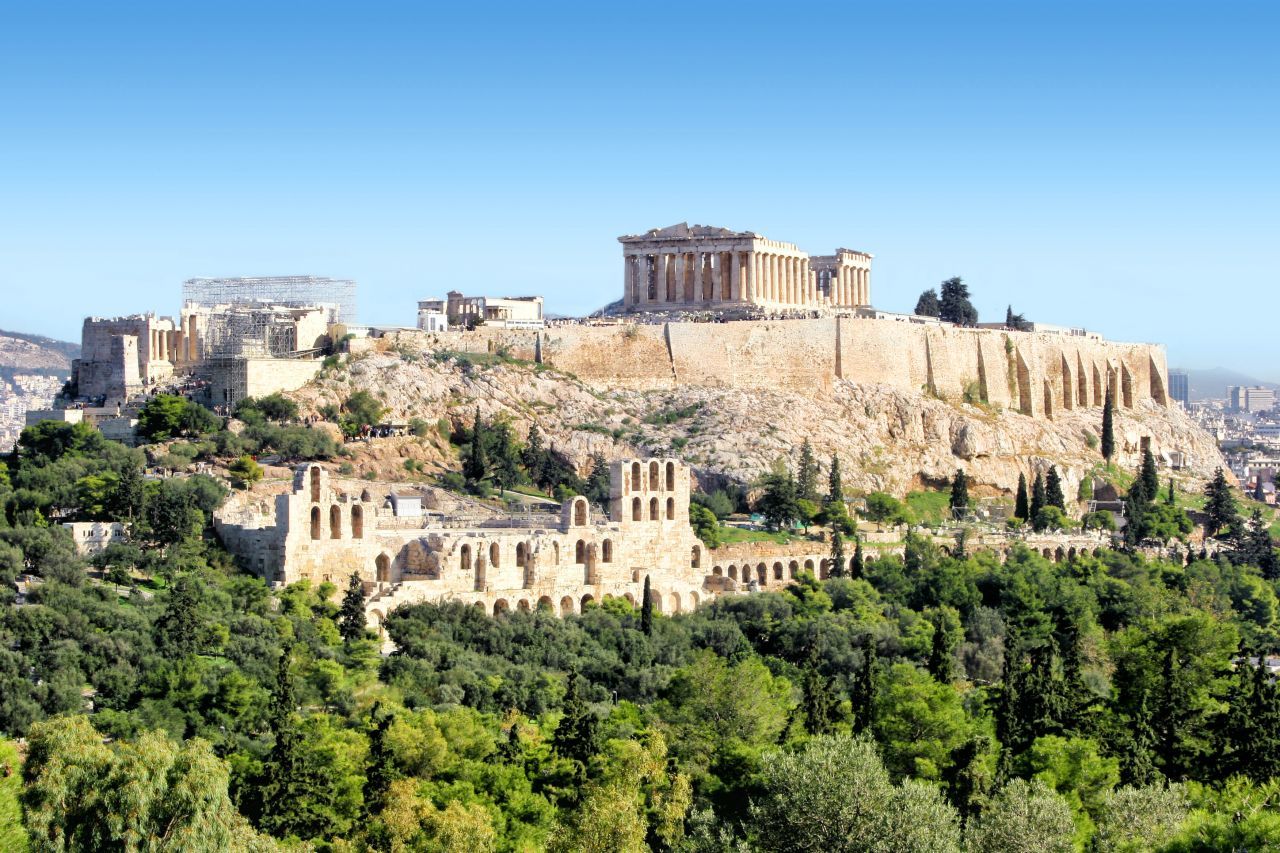 The Acropolis of Athens Greece

At the height of Athens' power, Pericles built on the Acropolis the Parthenon, a temple dedicated to Athena the Virgin (Parthena). Numerous other temples were built later on as well. Processions leading to the Parthenon used an inclined road which started in Thission.

Over the next two thousand years all the buildings, roads and dwellings vanished, buried under the earth. Only the Acropolis and the Parthenon withstood the ravages of time and wars, until 1687, when the Venitian Morozini bombarded it to dislodge the occupying force of the Turks, causing severe damage to the structures.

In 1821, during the Greek war of independence, the Turks stored their ammunition in the Parthenon, which blew up and destroyed the northern side of the temple.

Herakleidon Street is aligned with the Acropolis and from its balconies one can see the Parthenon.

Today it is a quaint pedestrian street lined with old buildings and cafes.

As you exit the Acropolis site you follow a pedestrian cobblestone street on your right. This street will lead you to the temple of Thission, one of the most well preserved Greek temples.

As you stroll down this street named Apostolou Pavlou (Apostle Paul), you eventually see Herakleidon Street on your left, easily recognized by the busy cafes. The museum is one hundred meters into the street. A little further down on Apostolou Pavlou you enter Monastiraki quarter, better known as Plaka.

In the south-eastern corner of Plaka, the Monument of Lysikratos dominates a small, triangular open area with a couple of quiet tavernas. It's near the end of Tripodon str.(Odos Tripodon), a relic of the ancient Street of the Tripods, where winners of dramatic competitions erected monuments to dedicate their trophies (in the front of tripod caudrons) to Dionysos. The Monument of Lysikratos, a tall and graceful stone and marble structure from 335 BC, is the only survivor of these triumphal memorials. A four-marble structure from the 335 BC, is the only survivor of these triumphal memorials. A four-metre-high stone base supports six Corinthian columns rising up to marble dome on which, in a flourish of acanthus-leaf carvings, the winning tripod was placed. The inscription on its architrave tells us that 'Lysikratos of Kikyna, son of Lysitheides was choregos (sponsor); the tribe of Akamantis won the victory with a chorus; Evairetos was archintrs'. The monument was incorporated into a French Capuchin convent in 1667, and trandition assets Byron used the convent as a study, writing part of Childe Harold here; at the time Athens had no inn, and the convent was a regular lodging for European travelers.

The street beyond, Vyronos is named after the poet who also participated in the greek struggle for Independence. As its far end, facing you across starts the area of Makriyianni called after the general Yiannis Makriyiannis (1797-1864) a General for the war of Independence and one of the protagonists in the movement of the 3rd of September 1843 for the first greek Constitution. On the same location is the Acropolis Study Centre (daily 8:30- 3 pm; free), flanked by the metro entrances and contaning little beyond plaster casts of the Marbes of Acropolis ( ripped off the Acropolis by lord Elgin , also called Elgin Marbles) and models of the winning designs for the Acropolis Museum.

It is situated beside the main entrance of the Acropolis on the south slope. One of the most evocative locations in the city, it was here that the masterpieces of Aeschylus, Sophocles, Euripides and Aristofanes were first performed. It was also the venue for the annual festival of tragic drama, where each Greek citizen would take his turn as member of the chorus. The ruins are impressive. Rebuilt in the 4th century BC, the theatre could hold 17000 spectators. Most notable are the great marble thrones on the front row, each inscribed with the name of an official of the festival or of an important priest; in the middle sat the priest of Dionysos and on his right the representative of the Delphic Oracle. At the rear of the stage along the Roman bema (rostrum) are reliefs of episodes in the life of Dionysos flanked by two squatting Sileni, devotees of the satyrs. Sadly, all this is roped off to protect the stage floor mosaic- itself a magnificent diamond of multicoloured marble best seen from above.

Above the theatre in the rock is curved the chapel of Panayia Khrysospiliotissa possibily turned into a chapel 1000 years ago; its worth a look for the setting rather than its kitsch iconography. To the west of the theatre extend the ruins of the Asklepion, a sanctuary devoted to the healing god Asclepios and built around a sacred spring. The curative centre was probably incorporated into a Byzantine church of the doctor saints Kosmas and Damian, of which there are prominent remains. Nearer to the road lie the foundations of the Roman Stoa of Eumenes, a colonnade of stalls that stretched to the Herodes Atticus Theatre.

Following the road or path over the flank of the Acropolis, you come out in to Dionysiou Aeropagitou a pedestrian Road by the Herodes Atticus Theatre. It was built by Herod Atticus, a Roman noble, in 160 A.D in memory of his dead wife. The faηade of the building was 28 m high and had curves that hosted beautiful statues. The theatre was made to host musical performances therefore it was named Odeon. The scene behind the stage had 3 floors from which 2 are still excisting. The Odeon was renovated in the 1950 s and 1960s with Greek Imitos marbles and hosts the Greek Festival (www.greekfestival.gr) an international event lightened with the participations of artists such us Maria Callas and Rudolf Nurejiev.

On the same time with the Odeon the stoa of Evmenes was built that was the refugee for the spectators in case of bad weather. The Turks destroyed the Stoa to turn it into a wall for the Acropolis, that they had turned into an arsenal. However the visitor can still see the big walls on the sides of the Acropolis.

Turning right, 100 m or so down and across the avenue, a network of paths leads up to Filopapapou Hill also known as the Hill of the Muses ( Loffos Musson). This strategic height has played an important, if generally sorry, role in the city’s history. It was from here that the shell that destroyed the roof of the Parthenon was lobbed; more recently, the colonels placed tanks on the slopes during their coup of 1967.

The hill is capped by the grandiose monument to the Roman senator and consul, Philopappus, who is depicted driving his chariot on its frieze. Again it is a place above all for views. To the west is the Dora Stratou theatre (or Philopappou Theatre) where Greek music and dance performances are held. Northwest, along the main path, and following a line of truncated ancient walls, is the church of Ayios Dimitrios, an unsung gem, which has kept its original Byzantine Frescoes. In the cliff-face across from this to the south you can make out a kind of cave dwelling, known (more from imagination than evidence) as the prison of Socrates.

Further to the north , above the church, rises the Hill of the Pnyx, an area used in Classical Athens as the meeting place for the democratic assembly, which gathered more than forty times a year. All except the most serious political issues, such as ostracism, were aired here, the hill on the north side providing a convenient semicircular terrace from which to address the crowd. The arena is today used for the son et lumiere of the Acropolis, which takes place on most summer evenings.

Continuing southwest from the Kydathineon-Adrianou intersection, up to the Thespidos str., you can reach the edge of the Acropolis precinct. Up to the right, the whitewashed cubist houses of Anafiotica cheerfully proclame an architect-free zone amid the higher slopes of the Acropolis rock. The pleasingly haphazard buildings here were erected by workers from the island of Anafi in the southern Aegean, who were employed in the mid19th century construction of Athens. Unable to afford land, they took advantage of a customary low to the effect that if the roof and four walls could be thrown up overnight, the premises were yours at sunrise. The houses, and the two churches that serve them, are the image of those the Cycladic islanders had left behind.

The Areios Pagos is the rock across the street from Dionyssiou Areopagitou from the Acropolis. This is where the first courts of the Athenian democracy were based, and is named after Aris (Mars), the god of war. According to legend, Orestis, haunted by the Furies, came here after killing his mother, Clytaemnystra, and was tried by court, at the behest of godess Athena.

The Areios Pagos, among other things, delivered opinions on the suitability of new religions brought to Athens from the outside. This is where Apostle Paul preached Christianity to the Athenians in 52 AD.

The nearest Metro stations are Acropolis, Thesseion and Monastiraki