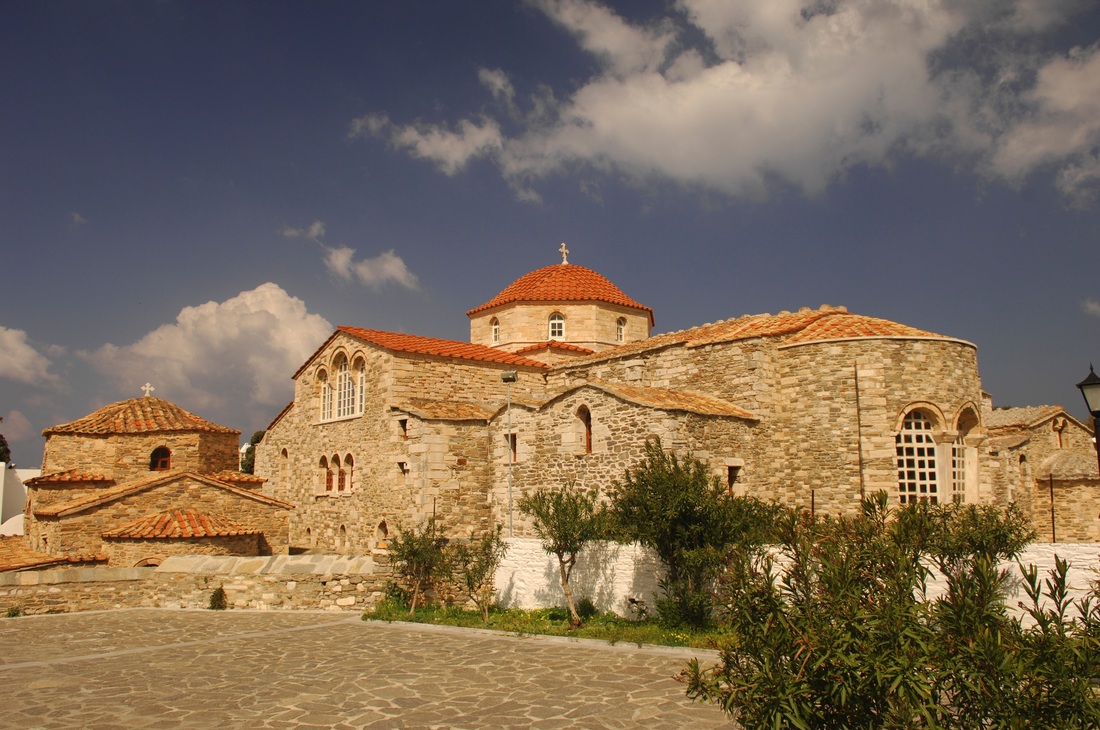 Four experiences to live in Paros

Wondering about the things to do in Paros? Well we present you four experiences to live in Paros: Synonymous with the island, Panagia Ekatontapiliani, one of the most famous orthodox pilgrimages in the Aegean Sea, is located in one of the most central and crowded spots of Parikia, within walking distance of the port of the island. For this impressive temple there are two names. The first, Katapoliani, refers to the geography of "the city", to the part of the ancient city, while the second (and today) Ekatontapyliani, in the tradition that says there are 99 clear doors in the church, with the 100th remaining hidden until the Greeks return back to the City.

In a project almost identical to that of Hagia Sophia in Constantinople, the temple of Ekatontapyliani was created by Ignatius, a student of the forerunner of St. Sophia Anthimius, and consists of a complex of buildings including the main church in the shape of a cross, six chapels, cells and the Baptistery. The church of Ekatontapyliani is dedicated to the Virgin Mary and is one of the most important monuments throughout the Cyclades. In cruciform basilica and naval bases, it dates back to the time of Justinian, about the middle of the 6th century, and according to tradition, its creation is due to imperial sponsorship. Something that is easily justified by the quality of the decoration and its construction. The creation of chapels, cells and a high enclosure around the temple date back to the 17th and 18th centuries. In the southwestern part of the cell block, today the Byzantine Museum is located, where part of the Ekatontapyliani relics are exposed. Among them are icons, wood carvings, vestments, ecclesiastical heirlooms and the wood-carved hedgehog of Ekatontapyliani. The church is celebrated on 15 August, the day of Assumption, with great honor and religion, while outside the church is a big feast. In the hinterland of the island, at an altitude of 250 m and about 10 km from Parikia, is located the most beautiful, picturesque and traditional village of Paros, Lefkes. Maintaining the traditional element intact and without being influenced by the mass tourism of the island, the settlement stands out for the majesty that characterizes it and the authentic and beautiful Cycladic icons it offers to its visitors. Thousands of Cycladic architectural buildings, alleys with painted white queens, traditional courtyards and colorful flowers take you back in time away from the crowds and overcrowding of the lively areas of Paros. The main road of the settlement will lead you to the traditional Lefkes café in the main square and then to the marble, metropolitan church of Agia Triada, one of the largest and most important of the island. There, you will take a stop at the traditional Margarita café to enjoy the homemade lemonade and homemade sweets made by the owners. Lefkes was the first capital of the island that was created in the 16th century. from refugees from Crete and locals who fled to the mainland of the island to protect themselves from the pirates' attacks, named Yria. For lovers of hiking, a 7 km long Byzantine trail starts from the village, leading to the village of Prodromos.

The tiny island of Antiparos is reached within ten minutes from the port of Punta (8.5 km south of Parikia) and is an ideal choice for day or night excursion. The main street of Chora, full of sophisticated all day hangouts and tourist products with views, welcomes you to the island, giving you the feeling that time has stopped somewhere in the 1960s. With a very Cycladic aura, take you to the Castle where the day you take a stroll through the picturesque alleys and at night you will come across crowded bars for fun up to the morning. Those who are looking for refreshing moments head towards the beaches of the island with turquoise waters. Among them are those of Soros and St. George.

The latter, in fact, is the second settlement of Antiparos at its southern point. Opposite just the islet of Despotiko, which is worth visiting (from the harbor of the settlement leave boats), is located to enjoy your swim at its famous beach.Do not leave Antiparos if you do not visit the famous Katafygi Cave, one of the most important and beautiful not only of Greece but of the whole world. Antiparos, therefore, 100% Cycladic, has been "on the rise" in recent years. This, however, does not mean that her personality is altered. She has managed to keep her bohemian character and stand out in the choices of the public just for that reason. One day, eventually, it may seem a little too.

Surf on the Golden Beach and Punta From the world famous destinations for both wind and kite surf, Paros is favored by the winds, creating the ideal conditions for practicing your favorite water sports. On the island you will find specialized schools in the kind from which you can either buy your equipment or go to attend classes if you are not quite familiar with the sport. Of the most popular beaches for wind and kite surf Golden Beach, the new Golden Beach and Punta. Note that in New Golden Beach every year in August, the annual Wind surf World Championship is being held.

There are many choices when considering accommodation in Paros island Greece. However hotelscombined.com is the best solution by far. It searches and gets the best prices from all booking platforms available.